Nobody Saw No One, by Steve Tasane 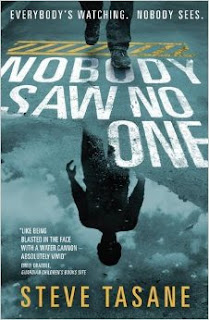 I was at YALC when somebody asked Patrick Ness if he thought there would ever be a kid's book written about Operation Yewtree- the institutionalised child sexual abuse investigation launched by the Met in 2012 that has dredged up handful after handful of disgraced past and present personalities from every sector of public life. Patrick's reply was "Good luck pitching that to your publisher". He obviously didn't mean 'that book shouldn't happen' or 'nobody would read that' or 'that would be a terrible book' but, rightly, he was unsure of if a publisher would feel comfortable unleashing such a potentially disturbing book onto the young reading public. Or if any of the young people that it was unleashed upon would read it. Never one to shy away from tackling difficult subjects head on, I'm sure he's thrilled to have been proven incorrect on this one. Steve Tasane has written that book, it has been published by Walker Books, and it is, most importantly, really, really good.

Nobody Saw No One is a modern retelling of Oliver Twist, replacing the workhouse with a negligent and corrupt care home, Fagin's den with a dodgy branch of Cash Converters and though the 'family' of broken boys are prone to the odd picked pocket or five fingered discount, they specialise primarily in internet scams and identity theft. Bill Skyes becomes the psychopathic Jackson Banks and his killer dog 'Obnob and Nancy is updated to Grace- a motherly and caring young woman that suffers abuse and misuse by JB.

The story is told through the eyes of two narrators, both runaways from Tenderness House Secure Care Home, a place that is anything bust secure and where bad things happen. Streetwise and cocky, Citizen Digit is a master thief and skilled in the art of disappearance. He has a shall we say unique dialect- think if Russell Brand wrote Urban Dictionary and lobbed in an extra helping of Spoonerisms. After spotting moon-eyed, baby faced Alfi Spar on the streets of London and recognising him from Tenderness, Digit takes him back to Cash Converters to join the gang of thieves, assuming his angelic looks would be useful for Virus, their unofficial guardian and manager. Alfi Spar is so named because he was found in a shop doorway as a baby and has been in care ever since. Unlucky, but honest and turfed from Foster to Foster through no fault of his own- Digit's life of crime is a shocking revelation to him.

I really liked the relationship depicted between the two lads- some of their story overlaps, so we get to hear both boys' thoughts on the same events. Digit feels a mixture of sympathy and frustration for Alfi- he's so pathetic he wants to help him, but knows deep down that it's risking everything he *is* in order to do it. Digit's anonymity is his superpower and Alfi knows his real name, knew him pre-persona when he was a care home inmate just like any of the others. Similarly, Alfi admires and respects Digit, but he doesn't trust him at all. He questions Digit's loyalty constantly, unsure if he will flake on his responsibilities, on exposing their abusers, on him.

Though sexual abuse is central to the story, there are no observed, explicit scenes- the characters are too traumatised to talk about it, even amongst themselves, resorting instead to codes; 'Jim'llfixits' and their 'Jimmy Parties' they call the perpetrators and the nights that they visit. The reader sees the extent to which the authorities ignore the problem- either because its in their interests to turn the other cheek, or simply because they don't believe the allegations. The kids in this book are proven liars, thieves and criminally delinquent- who would believe their accusations levelled at such pillars of the community? The book makes it clear, obviously, that these evil 'Jim'llfixits' are abhorrent in every way, but it also levels blame at those that see these things and know what's happening but do nothing about it.

This book really highlights the plight of those individuals that fall through the gaps of society. The invisible care leavers that walk out of the system at the age of 16 and the state considers them mature, secure and capable enough to fend for themselves in the outside world, whatever they've been through. It shows how easy it is to discredit the opinions, concerns or problems of people that have no voice, no back up from friends or family- it shows how easy it is for care leavers to become lost and sink. Care and crime isn't a foregone conclusion, but 23% of the adult prison population has been in care and nearly 40% of prisoners under 21 were in the care system as kids 1. How does this still happen?

Ultimately, this is a book about bravery and strength and about standing up for right and good against the odds. It's also about the emotional security that a home and a family provides, and the strength that that fortifies a person with. I loved the brotherhood that developed between Alfi and Digit, and Grace, to a certain extent- another let down care leaver that's been through everything that they have and more, just a few years earlier.

All in all, it's a riveting book that casts light on a set of very topical issues, some of which are issues that people are often reluctant to talk about. It handles the horrific abuse suffered at Tenderness sensitively and skilfully, and the reader can't help but root desperately for Alfi and Digit as they attempt to make their voices heard. It's pacey, frequently very funny and though the uber-urban dialect gets a bit distracting in places where you try to work out what the hell Digit is on about, it's genuinely gripping.