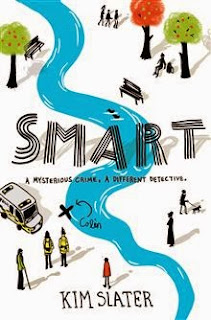 Smart is a charming and heartwarming book that begins with Kieran, amateur detective and CSI expert sitting on a bench beside the Trent comforting his friend Jean, a homeless woman who has just discovered the body of her friend Colin in the river. When the police dismiss the case as a probably drunken but tragic nonetheless accident, Kieran sets about using his unusual skills; an uncanny drawing knack, an unusually honed sense of observation and a kindhearted determination to solve the case and punish the person responsible.

Kieron quickly emerges as quite a remarkable boy. His narration is straightforward and honest, and in a lot of places thoroughly funny. The reader understands him perfectly, and though he doesn't speak much to other characters, he describes his thoughts and impressions and fears to the reader beautifully. It's obvious he struggles socially- he doesn't fit in at school, he's called names, he never knows what he should and shouldn't say, he has his own teaching assistant at school and suffers from anxiety blackouts when he gets stressed. He's different from everybody else but he's obviously an intelligent and incredibly thoughtful boy.

What makes him most remarkable though is his warmth and his impeccable conscience is in spite of being severely mistreated at home. When Kieron's mother goes to work, his lazy, abusive stepdad Tony threatens and bullies Kieron, and often beats him and his mother. Tony's son Ryan is cruel to Kieran and often breaks or ruins his things, a thug like his dad. Abused, hungry and terrorised, they're trapped in the house of a bullying criminal and living in fear of Tony's whims and moods. Banished to his room during the afternoons Kieran begins sketching the faces and writing down the numberplates of the 'visitors' that come to buy things in little plastic bags from Tony.

Influenced throughout by the paintings and philosophy of CS Lowry, the TV show CSI and half-remembered bits of advice about socially-acceptable behaviour from his TA Miss Crane, Kieran proceeds with his investigations that take him from Nottingham to Mansfield and back, and uncovers a few other mysteries on the way, some that hit harder to home, some that result in justice for the people he cares for. While the comparisons to Curious Incident, by Mark Haddon are inevitable, it feels like a very different book. More accessible, less isolating to the reader. More art and less maths. Kieron's strong sense of right and wrong is more identifiable than the impenetrable mysteries of Christopher's mind. Kieron's condition seems poles apart to Christopher's, though they have their amateur detective observation skills and tenacity in common. It deals more with the seedier side of life, the circles of poverty in forgotten estates, the things that go on behind closed doors.

I loved this book. It's a tightly plotted emotional whirlwind that celebrates doing the right thing and helping out friends. I'm from Nottingham, and it's weird to read about places that I know so well; the Lace Market, the Embankment...I'd even worked out which bus Kieron must have taken if it took an hour and 10 mins from Nottingham to the Ashfield Community Hospital (which is a real place, my Grandma was in there too for a while). Even Sutton (my hometown) got a namecheck and that almost certainly is a first.

It's a story that's both heartbreaking and warm at the same time, and it sensitively handles many dark themes; drugs, poverty, homelessness, alcoholism, domestic violence and abusive relationships. Kieron's learning difficulties are handled well too- you really see the person underneath the classification and that's brilliant. While Kieron obviously has difficulties, we never really find out much about his condition. Most readers of this book will have shared their classroom with someone like Kieron, whether that's the AS-ish disorder or the tragic homelife. I like that it doesn't shy away from handling difficult subjects. It's never preachy, and though Tony and Ryan are despicable it never feels too grim and desperate, so I think most school-aged kids could handle this book and relate to some aspect of Kieron's character.
at May 15, 2015