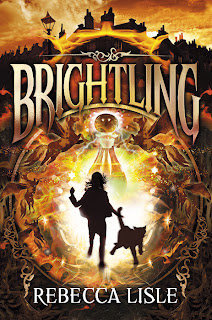 Set in an almost-Victorian world filled with flying horses and fearsome creatures, Brightling is a fast paced adventure story that has a traditional, almost classic feel to it- a modern re-imagining of Oliver Twist set in the world of His Dark Materials.  The characters are excellent, I really felt like I understood why individuals acted or responded in the ways they did, and I think the tight, twisty plot is going to prove really popular with younger readers.

As soon as she turns 11 years old, orphan Sparrow is unceremoniously ejected from the Knip and Pinch Home for Waifs and Strays. Guided by her one and only clue to her identity, a white baby shawl labelled "of Stollenbach" she sets off, alone to the town of Stollenbach hoping to find out who she is. Joined on the road by her faithful and possibly slightly magical cat Scaramouch, Sparrow must brave the unknown, the dangerous and the despicable to find out who she really is and if she belongs anywhere in the world.

Lost and afraid, Sparrow is taken back to a rooftop hideaway christened 'the nest', by Gloriana, a slightly older girl that she meets near the  market.  Managed by the mysterious and glamourous Miss Minter, Sparrow, Glori and the other girls make and sell matches and keep their mouths shut.  But what else is going on?  Refusing to be duped by Miss Minter's apparent kindness, Sparrow is on the alert as there is definitely something suspicious, probably illegal going on at the nest.  Determined to get to the bottom of it, Sparrow begins unraveling a dense web of secrets and lies and finds herself knee deep in a terrible smuggling operation.  Beaten, imprisoned and with an attractive price on her head, Sparrow must use her wits, her intelligence and her new best friend Glori to escape the nest forever, ruin the smugglers and avoid the clutches of several dangerous villains to get back to her family.

Sparrow herself is unusually endearing.  I often find that orphan girls can come across as a bit sickly and simpering, demanding sympathy and overall being a bit pathetic.  Sparrow, however is brave, she always thinks of others, she is mature for her age, learns from her mistakes, and tries hard to do the right thing. Which makes her really easy to read about and to care about.  I found myself really rooting for Sparrow and her cat, despite her tendency to get kidnapped quite a lot.  She always manages to find a way out of it.  Glori too is an interesting character; Miss Minter's original waif and right-hand-girl is as lost and as alone as Sparrow, and even more conflicted in the decisions she makes.  Feeling indebted to both Miss Minter and Tapper but gradually realising what she needs to do to redeem herself.  I honestly think 11 year olds are going to love this- there's feisty 11 year old girls, cool older sister types, the cleverest cat in the world, flying horses and a tiny sliver of magic.

It's a pacy read, full of page turning peril- deadly pursuits, captures, dramatic escapes, dastardly villains, kind strangers and an interesting plot that combines Oliver Twist and the story of The Little Match Girl.  There are themes of identity and belonging running throughout (for Scaramouch too, even he find out his origins) and a message about doing the right thing and following your head.  All of the tricky plot ends are tied up neatly at the end, which is satisfying and rewards the reader for sticking with the plot's twists.  I think it would be perfect for those younger readers that remain a bit daunted by long series, or 'issue' centered books but are looking for longer, more complex children's novels.
at January 22, 2014